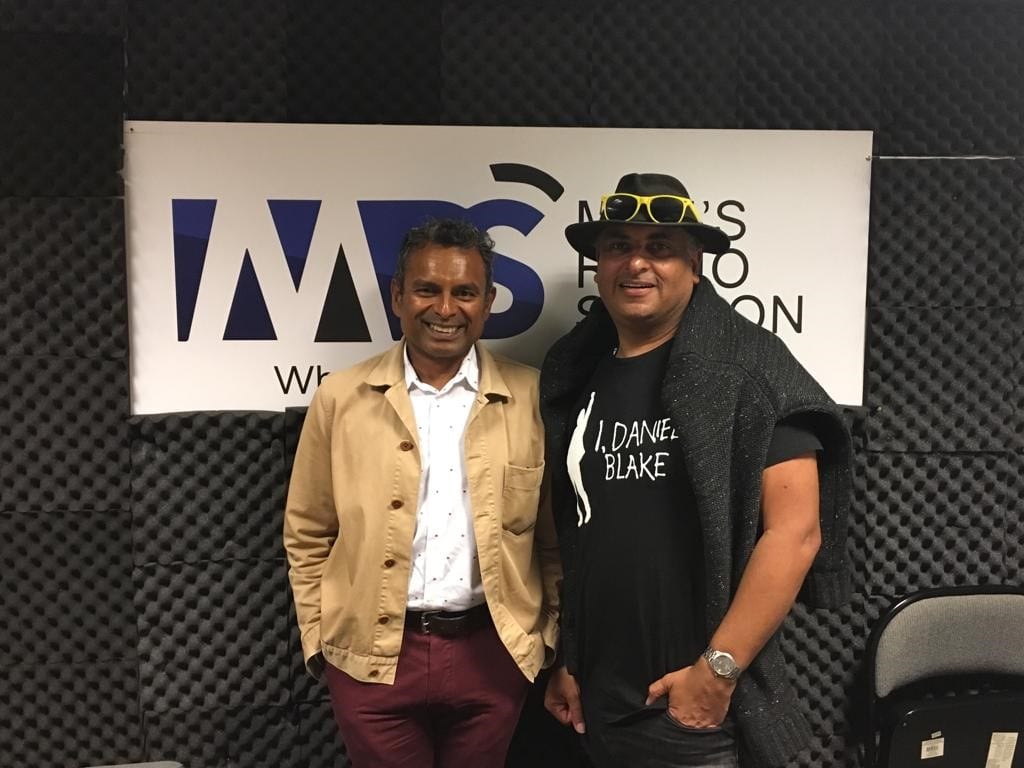 I’ve contemplated long and hard about what it means to be an Emotional Wellbeing Champion and I’d like to think that it’s an acknowledgment of how my story may help others to continue their own fights.

My life, as you’ll hear in the show, has been a constant struggle, involving loss, depression, abandonment, suicidal ideation and an almost lifetime struggle with Chronic Fatigue Syndrome all topped off with a decade of homelessness, still ongoing..

In my time without a home however, I’ve achieved some things I’m immensely proud of, like performing in the first opening 25 minutes of the Closing Ceremony of the London 2012 Olympic Games, learning to play & performing steel drums with Nostalgia Steel Band for the 50th Anniversary of the Nottin hill Street Carnival having never played before, securing a speaking role (as the outside Broadcast Link) on the BBC Newsnight Set of the immersive theatrical experience You Me Bum Bum Train, following up with my first professional acting & theatre directing gig in the play The Human Mating Dance as part of the Camden Fringe Festival.

I’ve continued to be a campaigning film-maker producing Colour Blind (my film addressing issues around seeing racism everywhere) which became the only short film to be premiered at the Leicester Square Odeon (thanks to friend and former Manager Chris Hilton) and latterly selected for the British Urban Film Festival, Managed to raise a £Million in kind support for The Feminist Car Commercial, a film that was designed to counter the misogyny in car advertising that year and produced and directed the first and currently only Video-Diary to be collected into the Museum of London’s permanent collection “Our London Lives” which is a testament to my passion for London and the love for my son Charles.

I’ve been a case study in the Housing Chapter of Dr.Fances Ryan’s campaigning book Crippled: Austerity and the Demonisation of Disabled People, spoken at the House of Commons in respect to Bob Blackman’s new Homelessness Reduction Bill & changed British Case Law with my action against the DWP at The Royal Courts of Justice (Paul Atherton V Secretary of State for Work and Pensions) as Litigant in person (on my own – no lawyer).

As well as holding some spectacular parties, including my 51st Birthday Party last year that involved a 17th Century Postman blowing his horn on Trafalgar Square and a Video Van roaming around Parliament Sqaure with my image of me speaking in the House of Commons on it, as clues to discover how to get to the venue.

This year, I’m hoping to put on a Photographic Exhibition entitled Paul Atherton’s Greatest Londoners (a collection of people from restaurants, tailors, bootmakers, hatters, bars and other businesses who’ve been nice and treated me well even knowing I’m homeless), my play Fifty Years Of Trying (which get it’s first taster at the Camden People’s Theatre on 16th March 2020) about the past ten years of my life living homeless and battling the state to get what is rightfully mine and a citywide Art Exhibition “Paul Atherton’s Displaced”, which puts on display all my luxury items stuck in my storage unit for the past ten years, to dispel many of the myths associated with homelessness.

But I’ve only achieved these things because of an amazing array of friends, who have offered their homes, cars, sheds, sofas and back-rooms for me to get shelter. Provided emotional support and shoulders to cry on and been there with words of encouragement.

I’m inordinately blessed (a choice admittedly but one I could have easily missed out on) to live in a city that allows you the opportunity to do so much for free and with easy access, if you simply reach out to people – which is how I ended up on Men’s Radio.

And I never forget how lucky I am, that I was fostered by an amazing family, who gave me a superb education, taught me to pursue every opportunity and regardless of my skin colour, always made me believe I’m capable of achieving anything.

So many people don’t have those advantages and it’s why Men’s Radio and Men’s Talk is so important.  We need a space to share and support each other, it’s vital to our mental health, our survival and societal cohesion as a whole.

Sharing our stories is key to understanding that our problems are not unique and that our solutions can be inspiring in others to keep going.

I hope that is the case here and as Emotional Wellbeing Champion I can truly do that title justice.